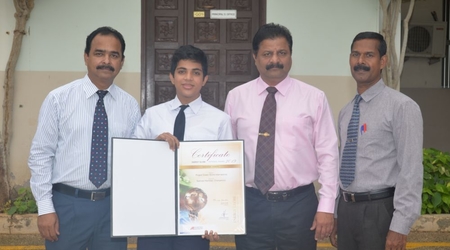 A ninth-grade Indian School Salalah student in Oman, Samved Nambiar has won the National Energy Globe Award, a globally renowned prize for environmental conservation, for his stewardship of Oman’s environmental beauty and natural resources. Samved Nambiar is currently the youngest recipient ever to receive the Energy Globe.
The winners, in the categories of Earth, Fire, Water, Air and Youth, are selected by a panel including members from the United Nations Industrial Development Organization, World Bank and the European Renewable Energy Council. The awards were an initiative by Austrian engineer and environmentalist Wolfgang Neumann. The herculean status of the Award often equates it to Nobel Prize.
The project submitted by Samved Nambiar, a student of Indian School Salalah, was aimed at raising awareness about the negative effects, mankind’s certain activities have on the environment while also suggesting possible solutions for them. He has been an environmentalist since elementary-school having co-founded Project GreenWorld International, (at the age of seven) an international organization encouraging children to take environmental action, with his elder brother, Hridith Sudev. Through his work, Samved Nambiar has led numerous efforts to protect the planet and have come up with campaigns to further his goals as well. The Energy Globe Award is the latest recognition his work has garnered.
With 187 participating countries, the Energy Globe Award is today’s most prestigious environmental award and the award signed by environmental activist, Maneka Gandhi and Energy Globe Founder, Mr. Wolfgang Neumann is awarded annually to projects focusing on energy efficiency, renewable energies and the conservation of resources.
Master .Samved was appreciated by the acting President of the school management committee, Dr. Syed Ashan Jamil and  Principal Mr. Deepak Patankar ,staff members and the students.